The Singapore delegation waves their flags during the Jerusalem March. (Credit: Maayan Jaffe-Hoffman)

A whopping 7,000 faces and hundreds of flags of every color painted Israel’s capital on Thursday, parading through the streets in the 2018 Jerusalem March.

The diverse participants, decked out on Sept. 27 in costumes representing their respective nations, had one thing in common: a love of Israel and the Jewish people. 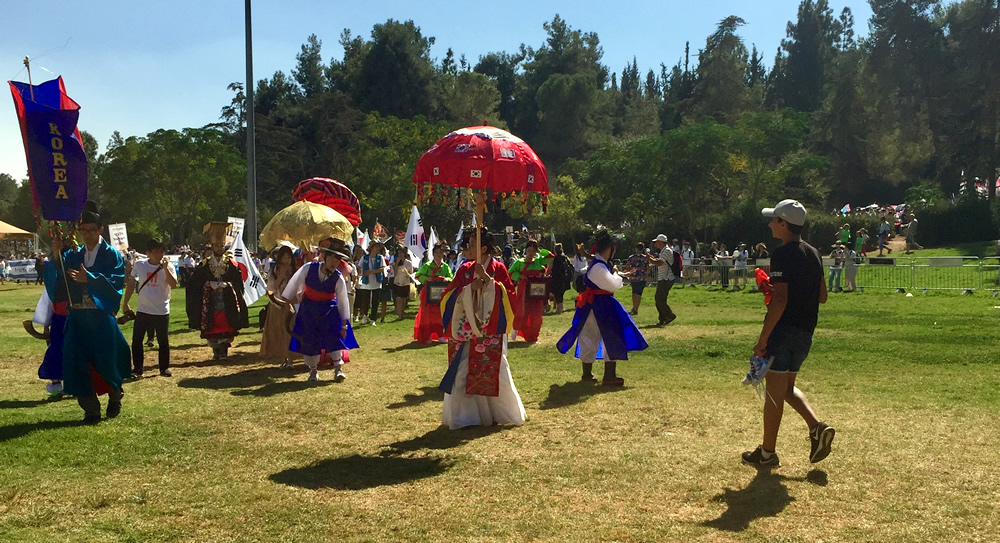 Many of the 7,000 Christians who walk in the Jerusalem March dress in costumes representative of their countries. Shown here, Koreans wear authentic garb. (Credit: Maayan Jaffe-Hoffman)

The Jerusalem March is organized each year by the International Christian Embassy in Jerusalem as part of its five-day Feast of Tabernacles celebration, which ran this year from Sept. 23 to 28. The feast is the largest Christian gathering in Israel this year and the largest solidarity mission to Israel in 2018.

According to David Parsons, vice president and senior international spokesman for ICEJ, around 60 percent of this feast’s 6,000-person delegation (an additional 1,000 Christian Zionists take part in the march that are not part of the feast) came from Latin America, Africa and Asia. The largest delegation of 900 people came from Brazil.

Parsons said all major sessions are translated into 12 languages simultaneously.

Participants enjoy dynamic music and dance performances, and hear messages from well-known evangelical pastors, Israeli officials and other experts. They also march to express their solidarity with Israel. The economic impact on Israel of the event is around $18 million to $20 million, according to Parsons.

“My heart wants to be here more than one week as a tourist,” said Cornelius Mgeller, a student visiting Israel from Stuttgart, Germany, who spoke to JNS outside the Pais Arena, where most Feast of Tabernacles events take place. “I want to go deeper … I am an ambassador who wants to bless Israel.”

Mgeller described the feast as an opportunity to “make friendships and worship the Lord.”

Each year, ICEJ centers the feast around a biblical theme. The 2018 event was based on a verse in Psalm 126:1, “When the Lord restored the fortunes of Zion, we were like those who dream.” 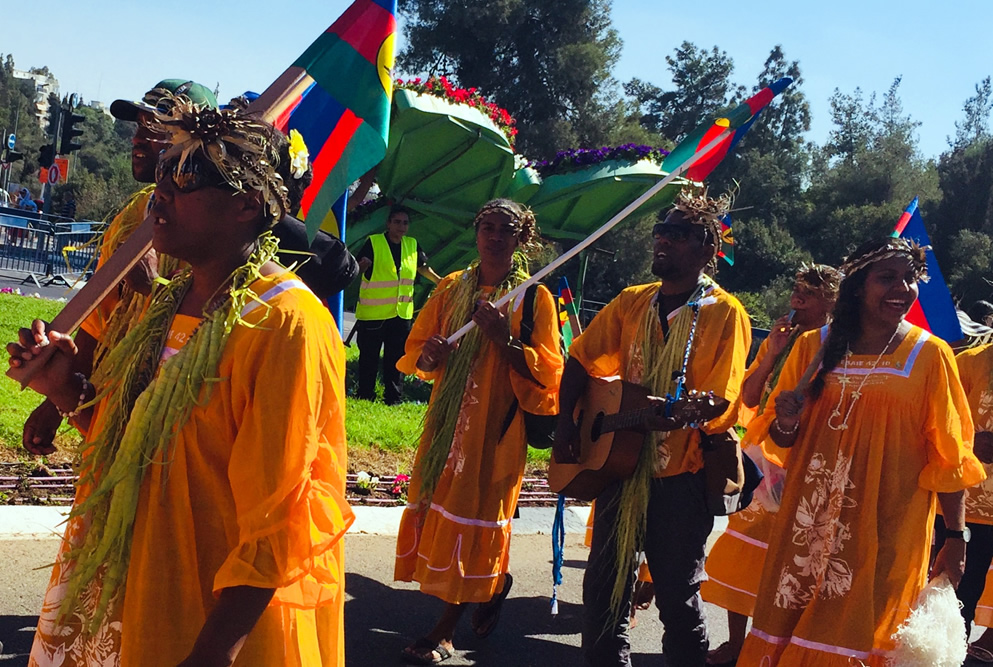 “What generations of Jews dreamed about when they prayed at every year’s Passover, ‘Next year in Jerusalem,’ has now become a reality,” said ICEJ president Jurgen Buhler. “Today’s reality represents ancient and eternal promises seeing fulfillment.”

The theme was integrated into the program in part through a new focus on Israel’s high-tech and business sectors. ICEJ engaged OurCrowd equity crowdfunding platform to present about Israel as the “Start-up Nation,” including both a speech by OurCrowd founder Jon Medved, a one-hour breakout session on the subject, and recruiting artificial intelligence and virtual-reality companies to display their work in the Pais Arena atrium.

Parsons said that ICEJ wants to be honest with its Christian volunteers, who often become donors, that while Israel is a success story in many ways, at the same time, the country still has its share of challenges. ICEJ raises money to support Holocaust survivors, single-parent and large families, and other charities. 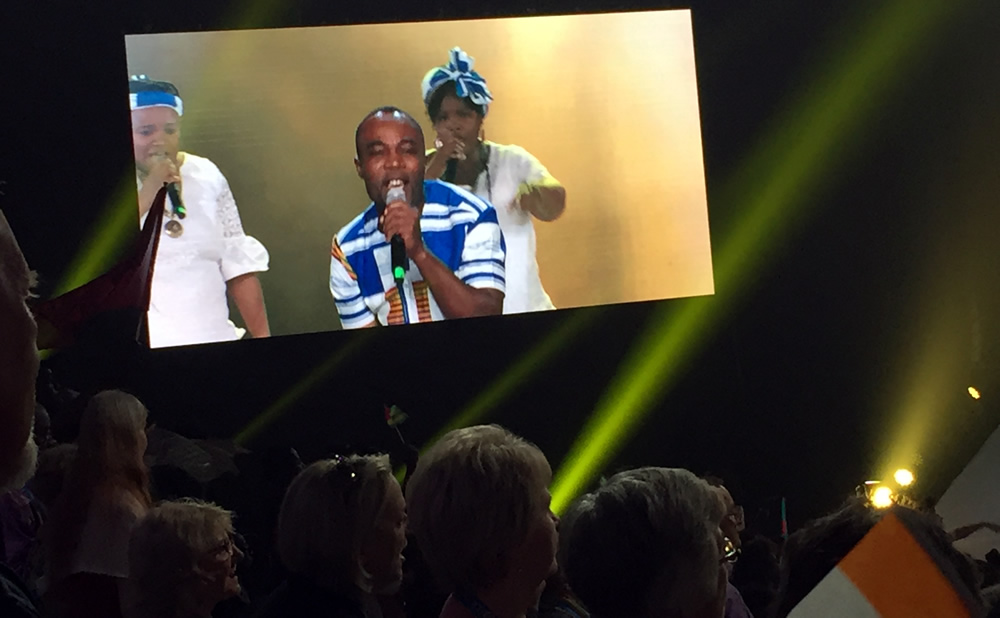 For “Israeli Guest Night” on Thursday evening, a bus load of Holocaust survivors was brought to the Pais Arena, where they took the stage alongside their Christian supporters and danced together to traditional Jewish songs.

Another roughly 1,000 local Israelis joined the feast pilgrims for the night’s cultural and musical program, featuring recording artists, choirs, and other performers from Israel and around the world. The program also celebrated the move of the U.S. embassy to Jerusalem.

“I think they consider us a strategic asset for the State of Israel,” Parsons said, noting that ICEJ was established during the first Christian celebration of the Feast of Tabernacles in September 1980, at a time when the last 13 national embassies left Jerusalem for Tel Aviv. In response, 1,000 Christians from some 40 nations attended a first feast gathering and decided to open ICEJ as an act of solidarity with the 3,000-year-old Jewish claim and connection to the city. ICEJ has since grown into the world’s largest Christian Zionist ministry with branch offices in more than 90 nations and a reach to more than 170 nations worldwide.

Still, the Feast of Tabernacles is not without controversy.

Several of the event’s top speakers were Messianic Christians (Jews who believe that Jesus is the messiah). Messianism is rejected by the mainstream Jewish world. Parsons defended the organization’s decision, saying ICEJ is “not going to boycott anyone.”

“This is a Christian gathering to celebrate the biblical feast of Sukkot,” said Parsons. “We see hosting Messianics as an opportunity to engage with local believers in Jesus—this is who they are—and we feel they are part of the global body of Christ. But they are also Israelis, and they serve in the army and pay taxes here and are Israeli citizens. 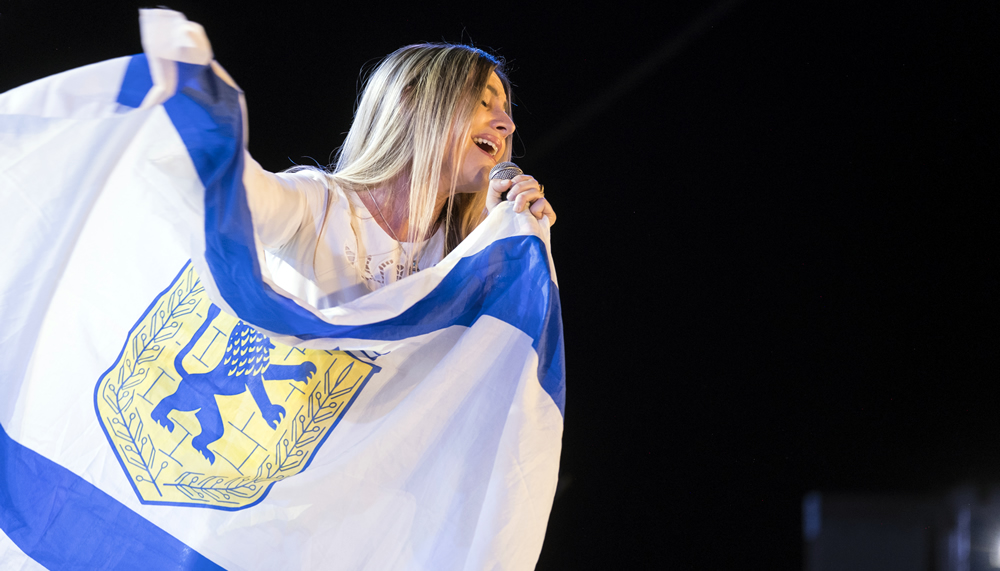 “We have had certain pressures to separate or distance from them, but we tell those people that we don’t tell the Jews who they should consider Jewish, and we will continue engaging with these Messianics.”

Parsons added that in his view Messianics can serve a vital role in helping “build support from the Christian world for the nation of Israel.”

This support, said Parsons, comes in many ways—political, diplomatic and financial.

For example, the government recently approved bringing another 1,000 Ethiopian Jews on aliyah. ICEJ committed to sponsor the flights. Most of the money is already raised, according to Parsons, and “the rest should come in quickly.”

At the feast, ICEJ premiered a new, 35-minute documentary its video team produced to tell the story of the last Jews of Ethiopia who have been searching for a way back to Israel—some for as long as three decades.

“Journey of Dreams” describes the plight of Ethiopia’s last 8,000 Jews, who pray to move to Israel while living in poverty and hardship in Ethiopia, through the story of one family. ICEJ’s team visited Gondar and interviewed the family, who had been stuck in a holding camp for 19 years, and then in Israel as the family was reunited with its relatives in the Holy Land.

“When we were in Ethiopia, we learned the community is referred to as ‘the people going home to Israel,’ ” said Barry Denison, ICEJ vice president of operations. “This is still what they are called, despite that it has been generations.”

Denison said ICEJ plans to “encourage the government to bring another 1,000 next year.”

Additionally, some 100 feast participants visited Jewish communities near the Gaza border, where violent Palestinian mass gatherings and arson attacks have plagued them all summer. ICEJ raised $438,500 to provide the Eshkol region with seven new mobile bomb shelters and 17 all-terrain fire-fighting trailers that can be hauled way out into the fields to put out fires from Gaza arsonists.

Parsons said ICEJ also has donors ready to give funds for three newly designed ATV security vehicles specially made to respond to border infiltrations, though those are still being designed and manufactured.

Parsons said Christians are “not afraid to go down near Gaza. They have this unwavering love for Israel. They do not want to be just fair-weather friends. When Israel is in danger, then this is when they want their support to count the most.”

Buhler said the Feast of Tabernacles is a dress rehearsal for the fulfillment of Zechariah 14:16, which describes how the nations will gather in Jerusalem to worship God and keep Sukkot.

“It is nice to see these people coming here and caring for us,” said Sara Dayan, a Jewish resident of Jerusalem who brought her children to watch the march. “Israel tries to be so loving to the rest of the world. This loving us back is just amazing to see.”