Turkey, the Arab World is Just Not That into You

For the Sunni Saudis, the Turks were allies only if they could be of use in fighting Shiite Iran or its proxies, such as the Iraqi government or the Syrian regime. Meanwhile, as Turkey, together with Qatar, kept on championing and giving logistical support to Hamas, an Iranian satellite, Saudi Arabia and Egypt distanced themselves from the Palestinian cause and consequently from Turkey.

He runs around in a fake fire extinguisher’s outfit, holding a silly hose in his hands and knocking on neighbors’ doors to put out the fire in their homes. “Go away,” his neighbors keep telling him. “There is no fire here!” I am the person to put out that fire, he insists, as doors keep shutting on his face. That was more or less how Turkish President Recep Tayyip Erdogan’s neo-Ottoman, pro-ummah (Islamic community), “Big Brother” game has looked in the Middle East.

After years of trial and failure Erdogan does not understand that his services are not wanted in the Muslim neighborhood: The Iranians are too Shiite to trust his Sunni Islamism; the (mostly Sunni) Kurds’ decades-long dispute with the Turks is more ethnic than religious, and Sunni Arabs do not wish to revisit their Ottoman colonial past. Still, Erdogan insists.

Turkish textbooks have taught children how treacherous Arab tribes stabbed their Ottoman ancestors in the back during the First World War, and even how Arabs collaborated with non-Muslim Western powers against Muslim Ottoman Turks. A pro-Western, secular rule in the modern Turkish state in the 20th century coupled with various flavors of Islamism in the Arab world added to an already ingrained anti-Arabism in the Turkish psyche.

Erdogan’s indoctrination, on the other hand, had to break that anti-Arabism if he wanted to revive the Ottoman Turkish rule over a future united ummah. The Turks had to rediscover their “Arab brothers” if Erdogan’s pan-Islamism had to advance into the former Ottoman realms in the Middle East.

It was not a coincidence that the number of imams [religious] school students, under Erdogan’s rule, has risen sharply to 1.3 million from a mere 60,000 when he first came to power in 2002, an increase of more than twenty-fold. Erdogan is happy. “We are grateful to God for that,” he said late in 2017.

Not enough. In addition, Erdogan would pursue a systematic policy to bash Israel at every opportunity and play the champion Muslim leader of the “Palestinian cause.” He has done that, too, and in an exaggerated way, by countless times declaring himself the champion of the Palestinian cause — and he still does it.

Erdogan’s Turkey championed an international campaign to recognize eastern Jerusalem as the capital city of the Palestinian state, with several Arab pats on the shoulder.

His spokesman, Ibrahim Kalin, happily said that the dispute over Jerusalem after President Donald Trump’s decision to move the U.S. embassy from Tel Aviv to the Israeli capital “had in fact united the Muslim world”.

A united Muslim front around the “Palestinian capital Jerusalem” is a myth. Iran, for instance, renounced Turkey’s Jerusalem efforts because, according to the regime, the entire city of Jerusalem, not just eastern Jerusalem, should have been recognized as the Palestinian capital. Before that, Turkey accused some Arab countries of showing a weak reaction to Trump’s decision to move the U.S. embassy to Jerusalem.

The Turkish-Arab fraternity along Muslims lines is an even bigger myth. For instance, the Saudi-led Gulf blockade of Qatar imposed in June came as a complete shock. One of his Sunni brothers had taken out the sword against another?! Turkey’s Sunni brothers had once been sympathetic to his ideas but no longer are.

Only two years ago, Turkey and Saudi Arabia were mulling the idea of a joint military strike in Syria. 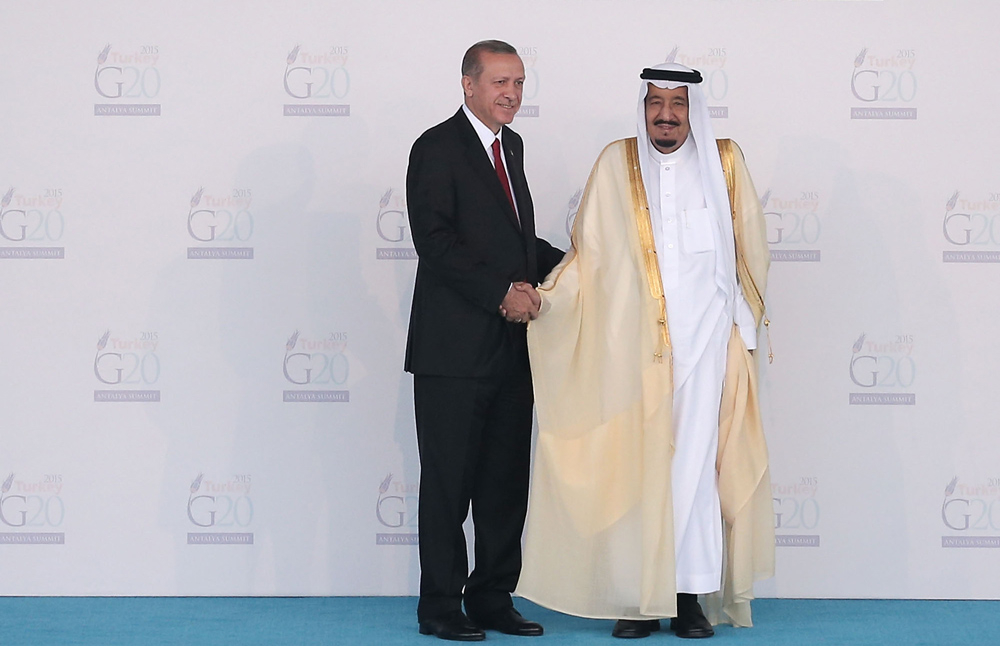 For the Sunni Saudis, the Turks were allies only if they could be of use in any fight against Shiite Iran or its proxies, such as the Baghdad government or the Syrian regime. For the Saudis, Turkey was only useful if it could serve a sectarian purpose. Meanwhile, as Turkey, together with Qatar, kept on championing Hamas, Saudi Arabia and Egypt distanced themselves from the Palestinian cause and consequently from Turkey. Both the Saudi kingdom and Egypt’s al-Sisi regime have viewed Hamas, an Iranian satellite, with hostility, whereas Turkey gave it logistical and ideological support. Another reason for the change in Saudi Arabia’s position toward Turkey — from “friendly” to “semi-medium-hostile” — is Saudi Arabia’s newfound alliance with Egypt’s President el-Sisi. El-Sisi replaced the Muslim Brotherhood president, Mohamed Morsi, in Egypt, while Turkey and Qatar, have effectively been the embodiments of the Muslim Brotherhood in the region.

Erdogan offered to build a Turkish military base in the Kingdom, for example, but in June, Saudi officials turned him down.

Erdogan might benefit by being reminded of a few facts and shaken out of his make-believe world. For instance, he might recall, that his worst regional nemesis is an Arab leader, Syrian President Bashar al-Assad, not an “infidel king.” He must realize that he is no longer the “rock star” he was in the streets of Amman or Beirut that he once was – when the only currency he could sell on the Arab Street was his anti-Semitic rants. Turkey does not even have full diplomatic relations with the most populous Sunni Arab nation, Egypt.

More recently, a tiny sheikdom had to remind Erdogan that his expansionist, “ummah-ist” design for the Middle East was no more than a fairy tale he persistently wanted to believe. In December, United Arab Emirates (UAE) Foreign Minister Sheikh Abdullah bin Zayed Al Nahayan shared a tweet that accused Turkish troops of looting the holy city of Medina a century ago. In response, Erdogan himself lashed out:

“Some impertinent man sinks low and goes as far as accusing our ancestors of thievery … What spoiled this man? He was spoiled by oil, by the money he has”.

But that was not the end of what looks like a minor historical debate. The row symbolized the impossibility of what Erdogan has been trying to build: An eternal Arab-Turkish fraternity.

Anwar Gargash, UAE’s Minister of State for Foreign Affairs, said there was a need for Arab countries to rally around the “Arab axis” of Saudi Arabia and Egypt. Did Erdogan hear that? If not, he should have heard this one: Gargash also said that “the Arab world would not be led by Turkey”. In what better plain diplomatic language could the idea have been expressed?

Meanwhile, Erdogan keeps living in his make-believe world. Last summer, as part of his futile “euphemizing Arab-Ottoman history” campaign, he claimed that “Arabs stabbed us in the back was a lie”. Not even the Arabs claim they did not revolt against the Ottomans in alliance with Western powers.

If none of that is enough to convince Erdogan he should read some credible polling results. Taha Akyol, a prominent Turkish columnist, recently noted some research conducted by the pollster Zogby in 2016. The poll found that 67% of Egyptians, 65% of Saudis, 59% of UAE citizens, and 70% of Iraqis had an unfavorable opinion of Turkey.

Do not tell Erdogan, but if “polling” had existed a century ago, the numbers might have been even worse.